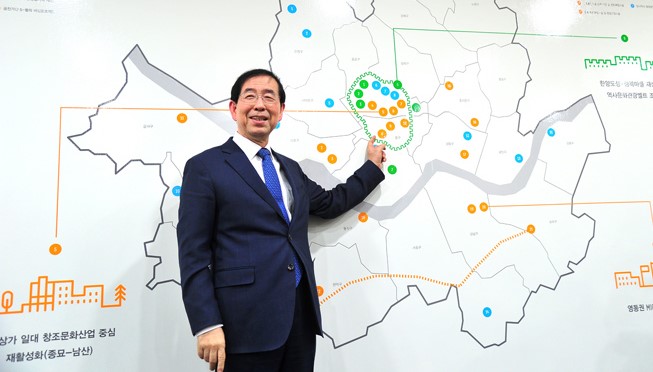 In October last year, an NGO founder and social innovator Park Won Soon (朴元淳) was elected Mayor of Seoul, becoming the second most powerful person of a major Asian nation. This was an event of equal, if not greater, significance. Unfortunately, this event has not been as widely publicized as it should be.

Mayor Park was recently in Hong Kong as the Guest of Honor for the launch of Social Innovation Exchange Asia (SIX Asia) which is part of a global movement to promote social innovation. It is perhaps a reflection of the ignorance of our mass media that his visit and the story behind this legendary Mayor were hardly reported in the press.

The Making of a Social Innovator

Park is a lawyer by profession and a well-known human rights lawyer. But he was most popularly known for his work as the founder of two NGOs – People’s Solidarity for Participatory Democracy (PSPD) founded in 1994 and the Beautiful Foundation founded in 2000.

The PSPD was founded in the most difficult political situation when South Korea just began to emerge from decades-long dictatorship. But it was to Park’s credit that he saw and seized the opportunity to create an organization to build a broadly-based citizen participation organization that eventually paved his way to Seoul mayorship. I was so impressed by his foresight and courage that I have excerpted the ‘Founding Statement’ of the organization in the following page. The Beautiful Foundation, on the other hand, is a very different organization, and is truly beautiful.

The Beautiful Foundation can be described as a community foundation. There is no counterpart organization in HK, so it might be difficult for us to understand and appreciate its nature and significance.

Just five years after its inception, 26,000 Koreans have become 1% giver, and the number has been increasing by 300 to 500 every month. Even more astonishing, around 90% of the donation has come through the internet. A key factor behind this success is transparency. Donors have their own individual membership number to access their own account, and they can see the history of their giving, where the money is used, how much is left, and so on.

The Beautiful Foundation also makes conscious effort to separate administration expenses and money for grantmaking. The former is kept strictly at 5%, compared to the 15% or 18% of many charitable organisations. A decision was also made to pay staff very low salaries – around half to one-third of those paid by other Korean foundations. Park himself earned US$2,000 per month when he was full-time General Secretary there – a fraction of what someone of his level could be earning.

It was interesting to note that there have been persistent debates within the organisation on the pay level. Park would like to see a gradual rise in pay for the Foundation staff. But his idea was strongly opposed  by the staff themselves who are mainly young people devoted to the Foundation’s mission. As Park observed, “I’m always saying we should increase salaries for the next generation… But I am afraid that the young generation are very different. My staff refused to go along with me.”

Other Donors Making the Difference

Around 40% of funds raised come from the 1 percent Sharing Campaign. There is another group of individual donor, ‘who donates periodically rather than regularly, and gives much more than 1 percent.’ They account for another 20% of total funds raised.

The remaining 40% comes from companies or businessmen. ‘Many companies set up a social contribution team,’ Park explains. ‘In the past they often donated money to politicians. In the last ten years, many businessmen and politicians have been punished for this, so the practice has greatly decreased. Companies are now keen to donate to social causes, so it’s a good moment for foundations to fundraise from companies.’

The closest thing we have in Hong Kong is the Community Chest. But this is just a central pool of donated money channeled to a large number of charitable organisations with little involvement from the donors as such. A community foundation, by contrast, is characterized by a high level of transparency and participation; the members will continue to pledge the donations only when they find the social causes the foundation is initiating and supporting resonate with their values and aspirations. A successfully run and broadly supported Community Foundation could become a major force for positive social change. It also serves as a powerful network of socially conscious citizens who might act together in times of crises and/or special events such as a major election. This was one of the main factors contributing to Park’s success in the Mayor election campaign. The funding support for the campaign had come primarily in small amounts contributed by young people via the internet.

What can we Learn from Park?

A tremendous lot. Recounting Park’s electoral success reminds us how miserable our CE election had been. We had two candidates, neither of whom the people of Hong Kong could identify with. The Korean citizens could have a free vote to choose their city mayors and presidents; when are we going to have this free vote? We had had a businessman, then a civil servant, then a career professional ‘elected’ as our CE, when are we going to have a social innovator having a chance to contest for this position?