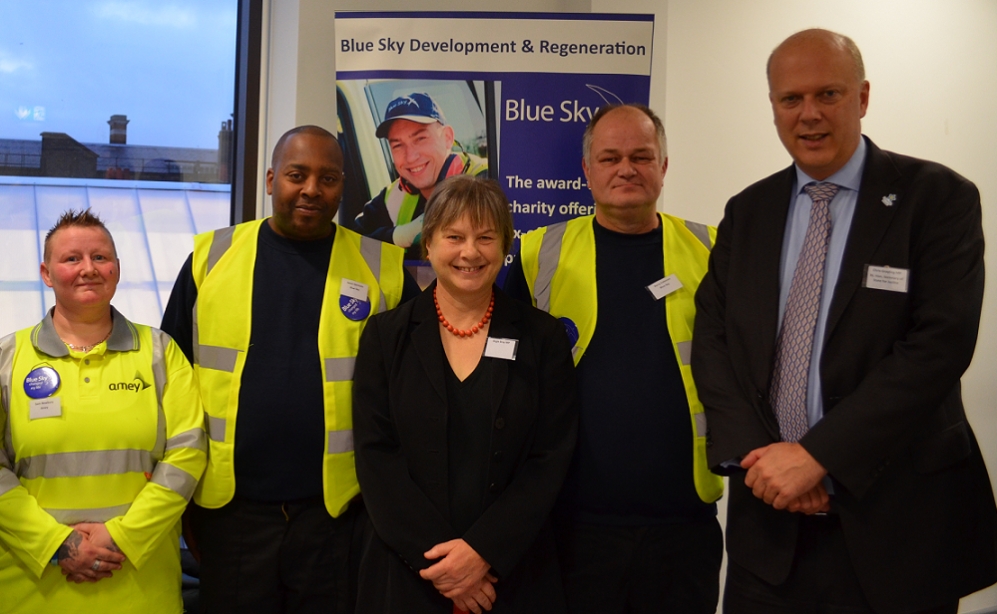 Mick May, Founder and CEO of Blue Sky Development and Regeneration, said: “We are delighted to have received this award from the Social Enterprise Coalition. We set up Blue Sky as a business with one, clear, social objective – reducing re-offending – which has driven us since day one. It therefore means a great deal to us to be recognized as a successful social enterprise.”

The award comes at a time of growing recognition with Blue Sky winning at the Charity Awards in 2010 and being named in January as one of two ‘Social Action Partners’ that staff from 10 Downing Street will be supporting during 2011. Blue Sky was selected along with Street League, an organization that delivers sports and educational programs to tackle issues including homelessness, substance addiction, crime and unemployment. Staff at the Prime Minister’s office will be able to pledge time throughout the year to support the work of these two organizations throughout 2011.

In the UK, the re-offending rate of those released from prison is unacceptably high. England and Wales alone release 90,000 prisoners per annum and over 60% re-offend within two years. To Blue Sky, re-offending is a criminal waste of money; it costs the UK 12billion pounds each year. Research has shown that a stable job cuts the probability of re-offending by up to 50%, yet, over 75% of ex-prisoners are unemployed on release.

Blue Sky works in London, Oxford, Slough, Manchester, Wakefield, Bristol and Gloucester providing six months of paid employment in the ground maintenance and recycling sectors. Employees work 37 to 40 hours a week in teams of between four and six. Each team has a supervisor, also an ex-offender who acts as a mentor.

As well as a paid job and mentoring, Blue Sky also offers its employees vocational training and practical help and advice – from how to set up a bank account to how to write a CV. Each member of staff has a tailored learning plan, laying out what they would like to achieve in their time with Blue Sky, and have access to a training budget.

What Blue Sky has achieved: statistics tell the story

There are a number of useful insights for us in HK. For example:

Blue Sky started as a charity and received funding from two charitable foundations (which continues to this day) and the European Social Fund (ESF). But they did not stop as a charity and went on to create a business model that served directly the social mission and generated income at the same time. It took them a number of years to make the transition but they knew that it is the only way to sustain the organization and progressively increase its social impact. As of end of 2010, the proportion of commercial income to total income was still 60%, but the impressive growth in absolute amount had
convinced the donors that they were doing the right thing.

No social enterprise would flourish without a strong dose of entrepreneurship. This is amply demonstrated again in Blue Sky’s case. Mick May, founder and CEO, used to work in the financial services industry. He has held a number of senior positions, including Managing Director of NationsBank and GNI Fund Management.

Mick joined Groundwork Thames Valley, a charity focused on community development projects, as Executive Director in 2003. He was shocked by the fact that ex-offenders were not having the chance to rebuild their lives resulting in an alarmingly high re-offending rate which in turn costs the society billions of pounds each year in terms of prison costs. He could not accept this and became ‘unreasonable’ – in George Bernard Shaw’s sense. (“The reasonable man adapts himself to the world; the unreasonable one persists in trying to adapt the world to himself. Therefore all progress depends on the unreasonable man.” He set out to create Blue Sky in 2004 with the mission of creating proper jobs for ex-offenders as a bridge to a new life. The rest is history.

From day one, Mick knew that it is quality of service that counts in running a social enterprise. He acknowledged the importance of having a first class team of permanent employees with first class systems and processes. He firmly believes that customers would not buy their service just because their employees are ex-offenders; they buy only because of proven track record of excellent service. No effort was spared to screen, train and manage the front-line teams to deliver a level of service at par, if not better, than other service providers. It was not an easy task but the persistent efforts have paid off. Customer satisfaction level of Blue Sky contracts are consistently high and this proved to be the most powerful marketing tool.

The lesson for HK social enterprises is loud and simple: focus on quality and no tolerance of mediocrity. It is a business after all.

Insight 4 – Scaling up for greater impact

By all account, Blue Sky is still a small business but it has great ambition to scale up its operation. After six years’ operation, it has perfected its basic business model to enable it to launch a franchise system. There are now two franchisees in place and both have been very successful – all down to their shared ethos and the quality of teams. While franchising is an attractive proposition in their growth plans, Mick wouldn’t do more than one a year due to quality being the critical factor. The core team at he headquarters has been very involved in setting up the franchise – they sat on recruitment panels, helped them understand the ex-offenders market, helped build the first team and monitored their performance. The ‘one franchise per year’ strategy is working out nicely and it will take time to beef up the process. Blue Sky is patiently ambitious to expand its coverage.

In Hong Kong, we do not seem to have any example of franchising in the social enterprise sector yet. But it is certainly an option worth considering when a successful social enterprise attempts to accelerate the process of scaling up for greater social impact. At the same time, aspiring social entrepreneurs should also consider becoming franchisees of internationally proven models (such as Dialogue in the Dark) which has the obvious advantage of being able to leverage on other people’s experience. A word of
caution: being a franchisee requires entrepreneurship all the same, as Dialogue in the Dark in HK has also demonstrated.